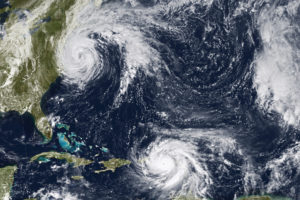 Hurricane Maria and Jose Menace the Caribbean and North Atlantic. Elements of this image furnished by NASA

Disaster May Lead to Innovation in the Caribbean

Clean-up crews will ship more than 580,000 cubic yards of debris off the U.S. Virgin Islands this fall.

That’s enough scattered pieces of waste and rubbish in the wake of two 2017 hurricanes that hit the islands to fill 175 Olympic-sized swimming pools.

The mountain of debris reflects just how far the U.S. Virgin Islands, Puerto Rico and other Caribbean nations must climb as they continue to bounce back from the devastation of Hurricanes Irma and Maria.

Fallen trees, downed power lines and flooded streets dotted miles of landscape after the Category 5 storms blew through within a two-week period. The hurricane double-dose overturned cars, sprinkled rubbish over the land like confetti and collapsed tin roofs like an accordion.

The two hurricanes took lives, destroyed infrastructure, demolished housing and public facilities and gutted the tourist-based economies in many of the island nations. A year later finds blue tarps still resting in place of roofs.

As the clean-up efforts continue, the USVI, Puerto Rico and other island nations face a complex question: How do they merge recovery with resilience? A group is pushing to rebuild infrastructure, so it not only brings back a sense of normalcy, but leaves the islands better prepared to handle the next major storm.

Federal funding programs are in place to boost recovery, but the requirements of each program leave challenges in terms of addressing the planet’s changing dynamics. The USVI, Puerto Rico and the other nations will have to overcome obstacles to use the funds to deal with climate change and strengthen its resistance to catastrophic storms.

But a movement is in place to bring about those improvements.

Changing With The Climate

Shortly after the hurricanes, the international community committed to making the Caribbean the world’s first climate-smart zone. In the last year, 26 countries and 40 private and public sector partners move towards the goal by creating a coalition to participate in the Caribbean Climate-Smart.

As defined by the World Bank, climate-smart zones reduce vulnerability to a range of climate-related hazards and natural disaster risks by targeting a number of improvements:

Reduce greenhouse gas emissions from transportation and other pollutants

Emphasize healthy ecosystems on the sea to support the blue economy

Enhance energy security via promotion of energy efficiency, renewable energy and use of low carbon sources

Incorporate one or more of the Sustainable Development Goals in all major projects sponsored by participating governments.

The Inter-American Development Bank has committed a billion dollars towards the accelerator’s goal of promoting a climate smart zone.

Even though the U.S. Virgin Islands joined the coalition, the projects approved and funded thus far focus more on speeding recovery than meeting climate smart goals. The USVI expects to utilize $1.86 billion dollars of Community Development Block Grants for Disaster Recovery from the U.S. Department of Housing and Urban Development (HUD), and $2.47 billion dollars from Federal Emergency Management Agency to fund recovery efforts.  Approximately a quarter of the HUD funds will be used for replacement of housing.  The bulk of the other funds are directed to roadway and utility repair.

The focus of the recovery projects in the USVI is consistent with federal policy. In the U.S., recovery resources are deployed under the auspices of FEMA in coordination with other federal agencies including HUD, the Small Business Administration, the Army Corps of Engineers, and the Environmental Protection Agency.

The government rewards communities which have engaged in pre-disaster planning, but only encourages mitigation and adaptation as part of post-disaster recovery projects in limited circumstances.

Navigating the Regulations of Recovery Funds

The Individual Assistance (IA) Program provides funds to homeowners shortly after a disaster to make temporary repairs to their homes. The funds, administered through FEMA, are designed to allow individuals to make their homes safe for habitation.

The Public Assistance (PA) Program reimburses communities for repair costs related to public infrastructure and for costs of debris management and removal, but limits coverage to damage caused by the storm, not deferred maintenance. A sub-program known as the “406” can lend assistance, but it requires case-by-case assessments and cost-benefit analysis that can lead to delays.

The third program is the Hazard Mitigation Grant Program (HMGP) which is a grant-based program designed to fund future storm mitigation efforts.  However, the government links eligibility to disaster declarations, so even after it issues a grant award, receipt of these funds is often delayed. Historically, the process has been so cumbersome and uncertain that many homeowners choose not to participate.

A second piece of federal legislation is the Disaster Mitigation Act of 2000.  This act adds to and consolidates earlier programs for Flood Mitigation Assistance and the Severe Repetitive Loss Program and adds a pre-disaster mitigation program to fund proactive risk reduction in advance of a storm.  The program is competitive, and funding is limited, so not all communities are awarded funds.

After any disaster, there are also supplemental appropriations by Congress to fund the various agencies disaster relief efforts that are not covered under the Stafford Act.  This highly political process involves lobbying by disaster-stricken communities and states, and in cases of multiple disasters in multiple jurisdictions, sometimes leads to competition for funds.  Supplemental funds are awarded with general rules as to their use. A designated agency must administer the funds.

These funds are directed toward perceived needs based on the impacts of disaster and can include costs of infrastructure repair and replacement, housing, social services, economic recovery and agriculture. Lead agencies can include HUD, FEMA, the US Army Corps of Engineers, EPA, or any other agency with responsibility under the National Response Framework and the National Disaster Response Framework.

Prioritizing Resistance Within the Federal Framework

Federal agency disaster recovery efforts occur based on two interrelated frameworks.  The National Response Framework is designed to address immediate disaster response to protect health, welfare and safety of disaster-stricken communities. The framework document can be retrieved at https://www.fema.gov/media-library-data/20130726-1914-25045-1246/final_national_response_framework_20130501.pdf.

It is through the latter framework that communities can begin to implement mitigation and adaptation efforts as part of disaster recovery.  The NDRF appoints lead and supporting agencies based on these subject areas: Community Planning and Capacity Building, Economic, Health and Social Services, Infrastructure Systems, and Natural and Cultural Resources.

The government tasks each lead agency with subject matter responsibility with developing pre-disaster programs designed to build relationships between state and local community disaster coordinators. Immediately after a disaster, these same agencies, under direction of FEMA, carry out immediate disaster recovery roles, and then, when the community is secure, transition to the longer-term programs for recovery planning.

In all cases, the work on disaster recovery is supposed to involve the local community as well as state and territorial governments.  The federal framework envisions federal agencies as facilitators and technical assistance.

The timeline for agency action under the NDRF stretches over multiple years.  However, the funding for these activities comes only from supplemental appropriations and annual agency appropriations in the federal budget.  Thus, the effectiveness of the federal government in providing services related to mitigation and adaptation can be constrained by limited resources.

Many of these recommendations would further climate-smart initiatives.  However, implementing the recommendations will require pairing local funding with federal disaster relief.  The limitations on federal funding, as described above, will pose a challenge.  For instance, rehabilitation of existing water distribution systems and closing the landfill, which has operated under EPA consent order for many years, may not qualify for federal disaster relief funds as both projects relate to pre-existing infrastructure deficiencies.

At the same time, because the USVI economy continues to struggle with approximately 50 percent of hotels inoperable due to storm damage, and job loss at 7.8 percent since the hurricanes, local funding is also limited.

The combination of federal regulations and limited local funding make it unclear how much progress will be made in the USVI towards the creation of a climate-smart zone. It also remains to be seen how successful other Caribbean islands will be in reaching that goal, as the resources available to many countries are much more limited than those available in the U.S. territories.

Hopefully, the Climate-Smart Accelerator will provide the vehicle to rebuild a resilient Caribbean, and the international community and the private sector will step in to fill the gaps in government recovery programs.